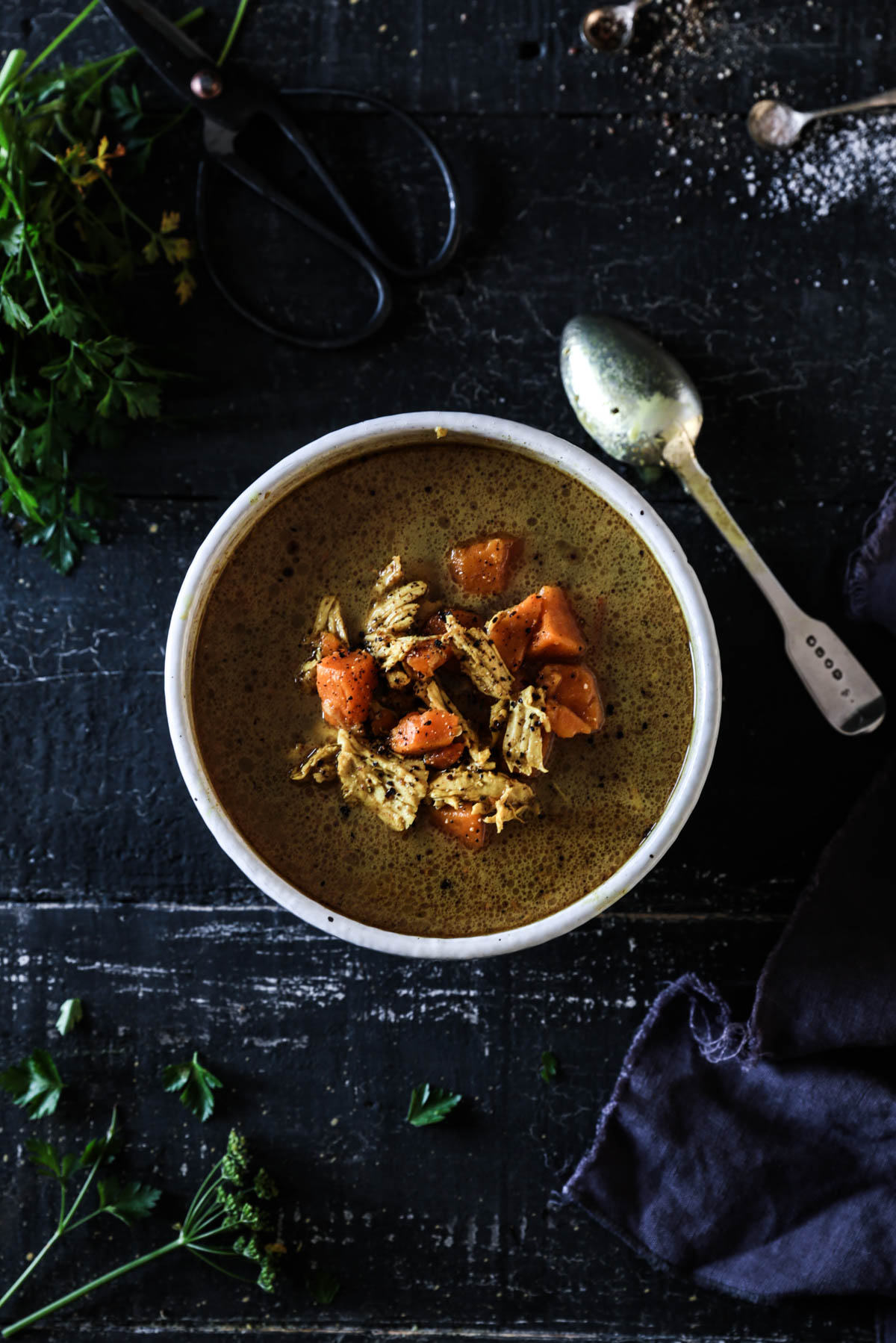 Ok, I know I’ve been sharing a lot of soup recipes lately, but this soup is SO good and has become such a staple that I just had to share.

With the onset of winter and colder temperatures, soup is the ideal warming meal. It’s surprisingly easy to make, so much so that I can’t believe I actually used to buy it! Simply  throw everything into a pot, allow it to simmer for 20 minutes, put it through a blender (or not in the case of this one), and it’s ready to go!

I have to admit, I used to buy the fresh, ready-made organic supermarket soups on quite a regular basis. But with many of the flavours containing wheat or dairy, the flavour choices really were limited, not to mention all the plastic packaging wastage! So this winter I made the decision to make my own soups, and this spiced coconut and kumara chicken soup is my version of my favourite bought one.

This recipe naturally lends itself to variations so feel free to play around with the ingredients. If you’re vegetarian or vegan – and still reading this post – this soup also works when made with vegetable stock and the chicken is replaced with tofu or chicpeas.

The old saying goes ‘chicken soup is good for the soul’, and as such it was often the prescription for the common cold. While it probably doesn’t cure the cold, there is some scientific evidence that chicken soup contains anti-inflammatory properties that can help prevent the miserable side-effects of a cold. Whether those properties come from the chicken itself, or the ingredients that usually go into a chicken soup such as garlic, onions and vegetables, is still unknown. But either way it’s an added bonus.

This soup contains turmeric and ginger which have some great anti-inflammatory properties of their own, as well as a good dose of garlic. Coconut milk added at the end of the recipe creates a nice fullness and additional flavour, however if coconut is not your thing then feel free to leave it out as it tastes pretty good with out it too. I’ve tried using coconut cream in this recipe but found it mellowed out the flavours way too much, however, if creamy and mild is your thing then give it a go.

This soup keeps for up to 5 days in a sealed container in the fridge and make sure you re-heat it well before serving. Enjoy this soup on its own, with your favourite seeded toast, or my favourite way is to place a large handful of baby spinach in the bottom of the bowl to get that serving of greens in. Enjoy!

Do you make your own soup?! What’s your favourite flavour? Tell me in the comments below! 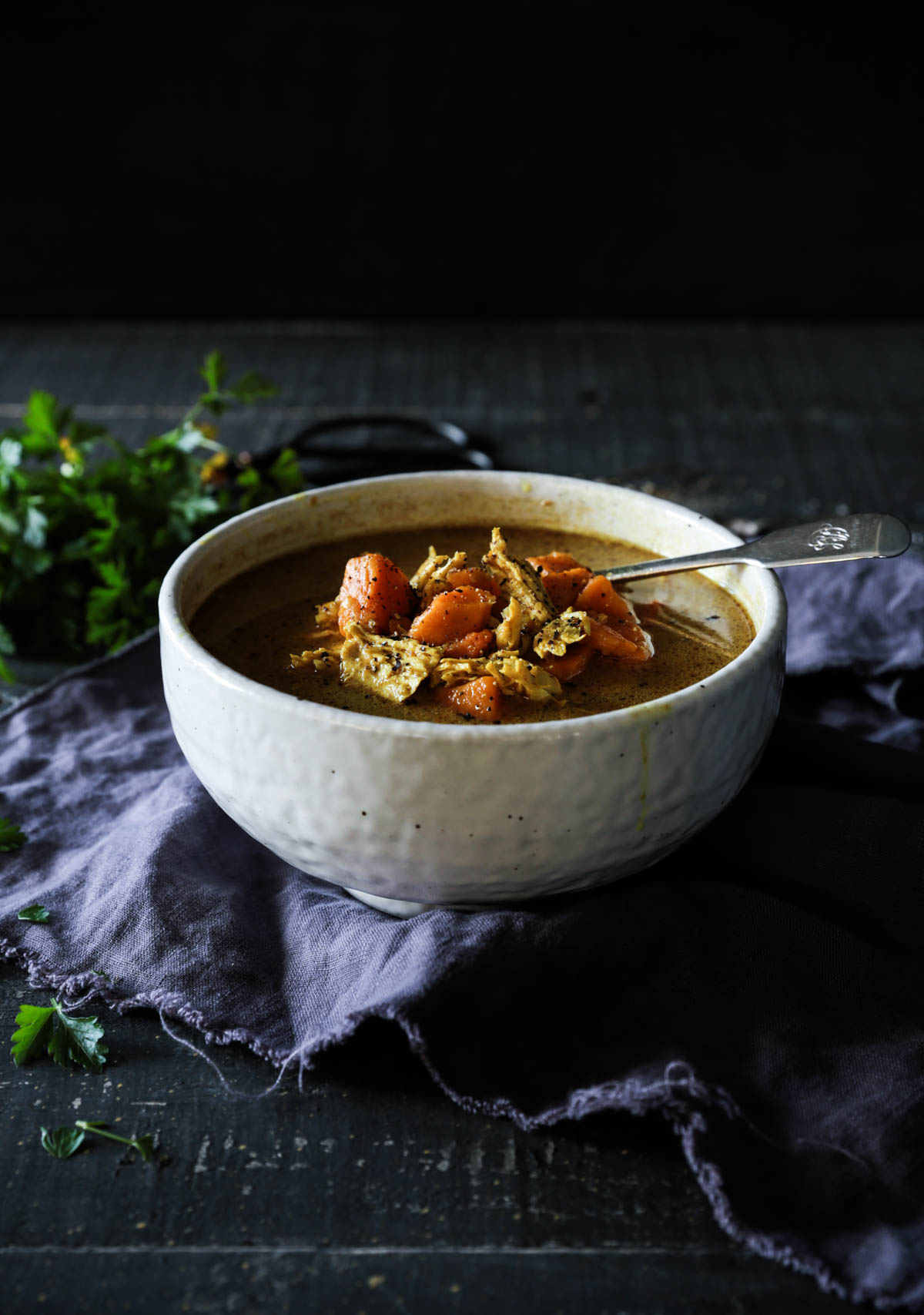 A note on chicken stock: Most stock powders are very high in salt and not much else so look for a ready to use liquid variety with as little additives as possible, and preferably low salt as you can adjust this to your taste. I use Imagine organic free range chicken broth which is low in fat, has no additives and can be found in most supermarkets. A good organic vegetable stock would also work too.

Place the stock/broth in a large pot with the water, garlic, ginger, turmeric, cinnamon and sea salt and bring to a simmer. Add the kumara followed by the chicken breasts.

Let the chicken cook through, approx 5-10 minutes, then lift out onto a plate with tongs and use a fork to shred it. Return the shredded chicken to soup and add the coconut milk and season with pepper.

To serve, place a handful of spinach in the bottom or the bowl and ladle the soup over top.

This soup will keep up to 5 days in a sealed container in the fridge, or up to 1 month in the freeze. 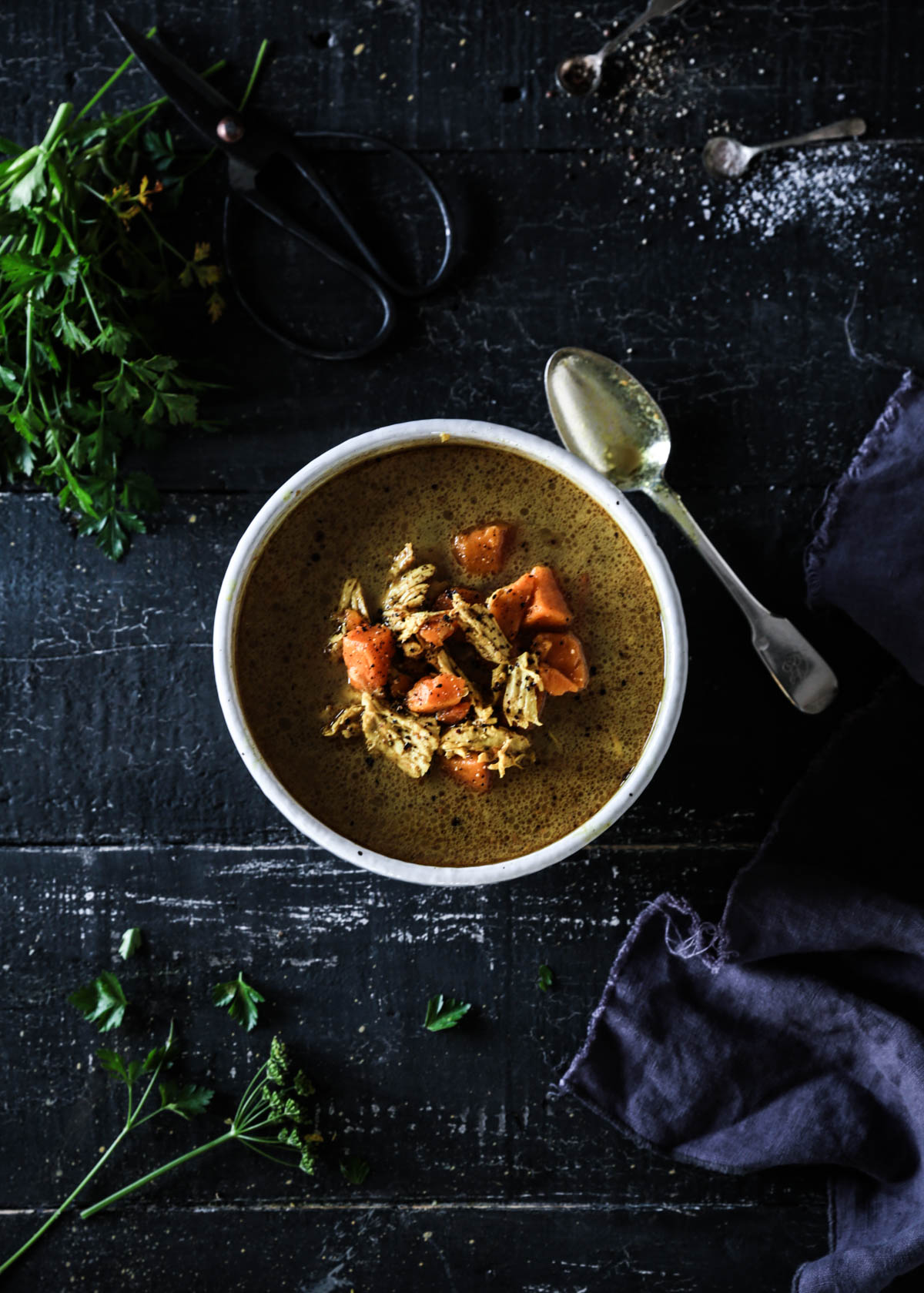