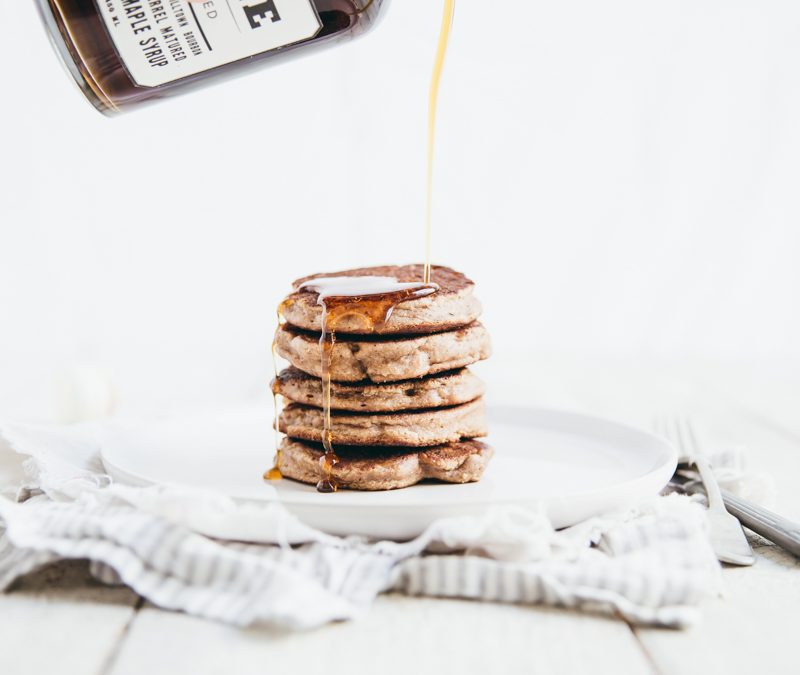 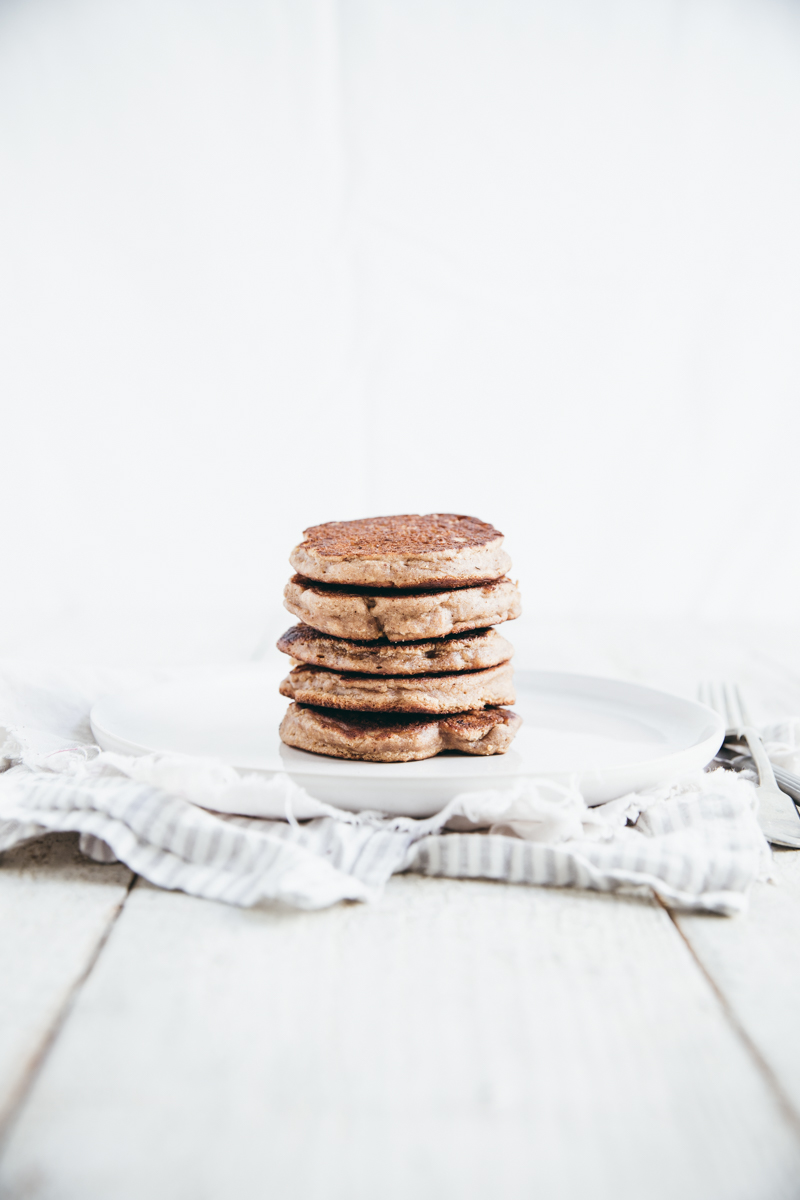 I was looking over my pancake recipes the other day and realised I still hadn’t posted a fully vegan and gluten free pancake recipe!

My two favourite pancake recipes to date have been these Cinnamon Bun Pancakes, which are super fluffy, donut-like pancakes with swirls of cinnamon and a sticky bun glaze. And these Spiced Carrot Cake Pancakes which are similar, but lower in sugar as they’re sweetened with carrots.

To create a fully vegan gluten free pancake recipe I used these two recipes as a base. I swapped the eggs for a combination of stewed apples (or applesauce) and nut butter, made a few little tweaks here and there, and the result is these Apple & Cinnamon Donut Pancakes! 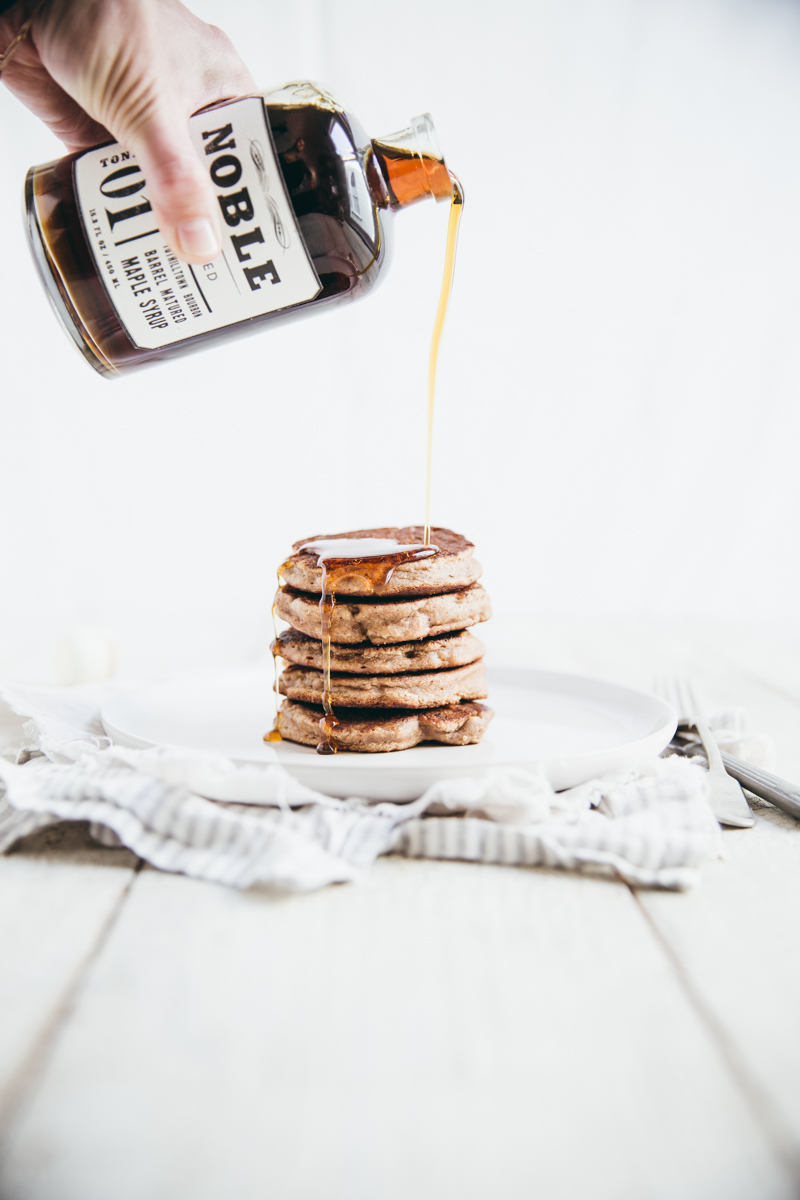 Because the texture reminds me of those amazing cake donuts that have a beautifully thick, fluffy texture with hints of nutmeg and cinnamon. The bonus about these pancakes of course, is that they’re much lower in sugar than your average donut as they’re sweetened with apple sauce, yoghurt and a little coconut sugar.

Buckwheat flour gives them lightness, while coconut flour helps them hold their shape. Using these two flours also means as well as being gluten free, these apple and cinnamon donut pancakes are also grain free.

Serve these pancakes hot straight from the pan with a drizzle of maple syrup and dusting of cinnamon, or for a low sugar option a dollop of your favourite coconut yoghurt.

These pancakes keep well in the fridge for a couple of days so that’s breakfast and snacks sorted, and if you make a double batch stick half in the freezer and your future self will be thanking you later! 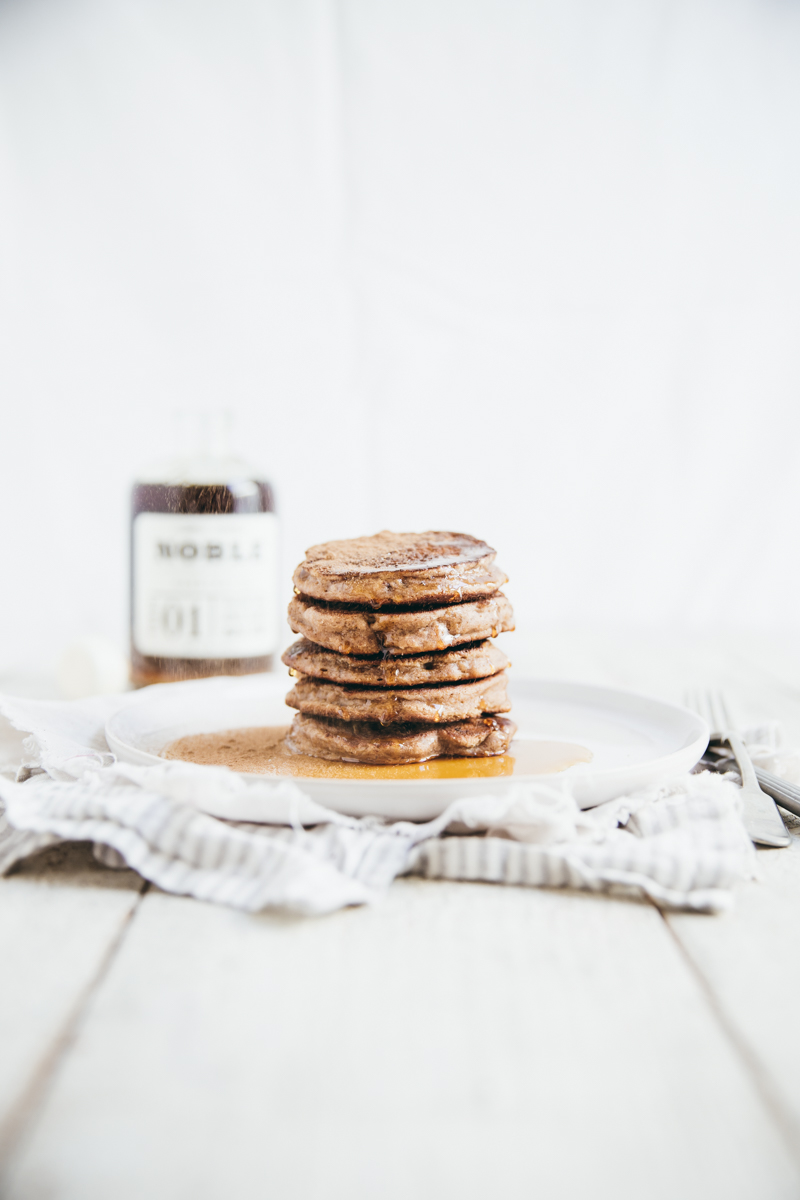 If you make these Apple & Cinnamon Donut Pancakes, let me know!

Heat a spoonful of coconut oil in a heavy based fry pan over medium low heat.
When the pan in hot add spoonfuls of pancake mix and shape into round circles.
When you see bubbles appearing all over, flip the pancakes to cook the other side adding more coconut oil as you need it.
Keep an eye on your pan heat, if it gets too hot the pancakes will burn quickly.

Pile the warm pancakes up on a plate, drizzle with pure maple syrup and top with berries, pomegranate seeds and cinnamon. 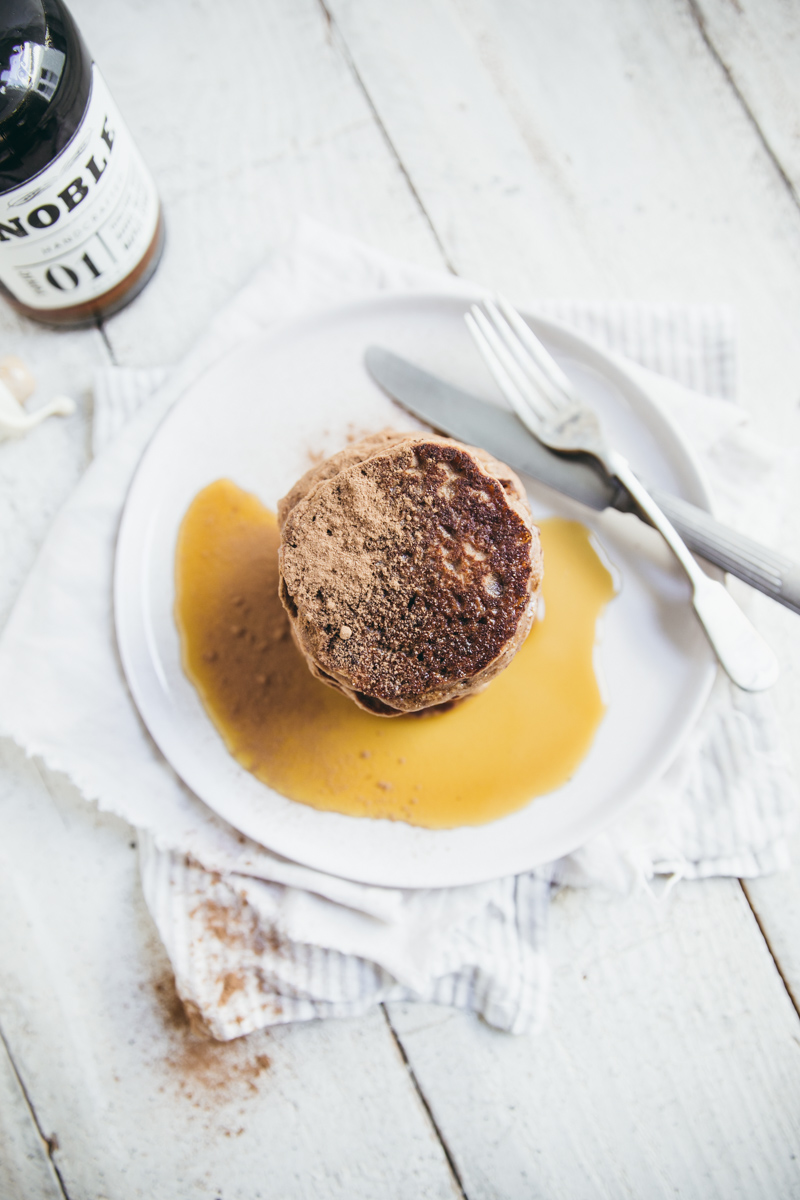 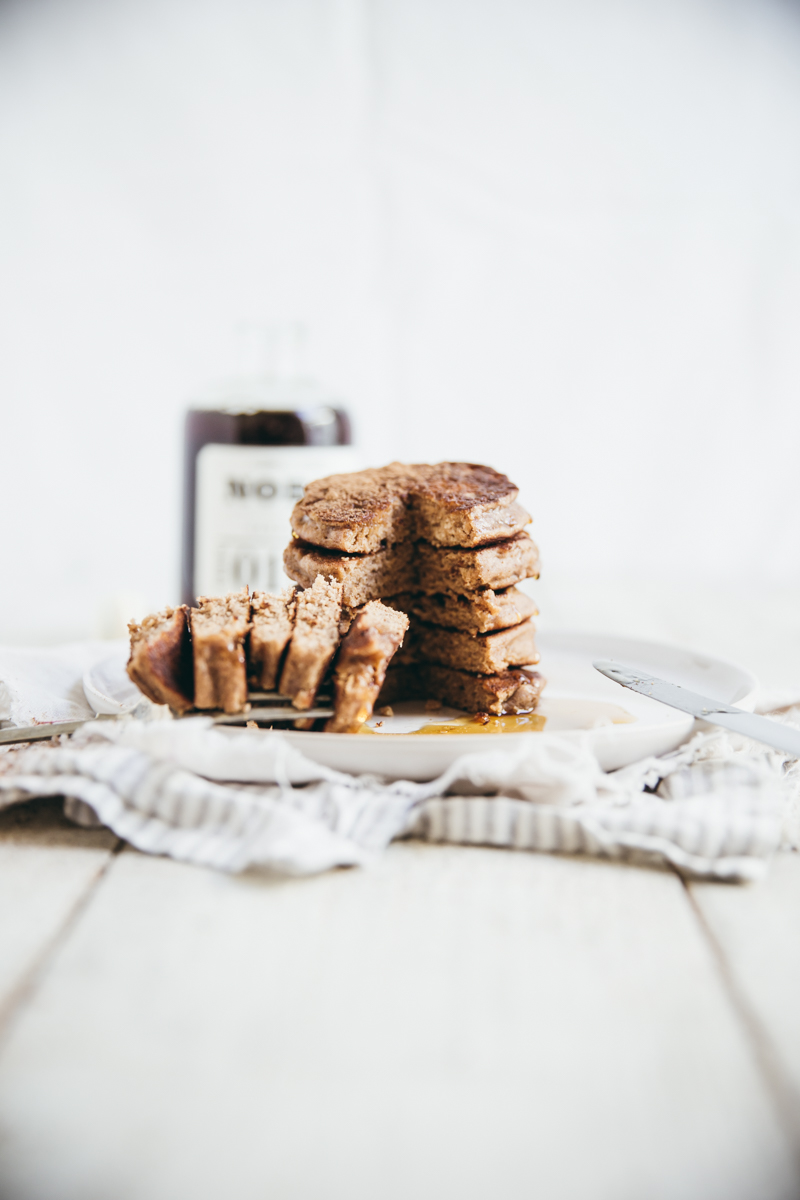 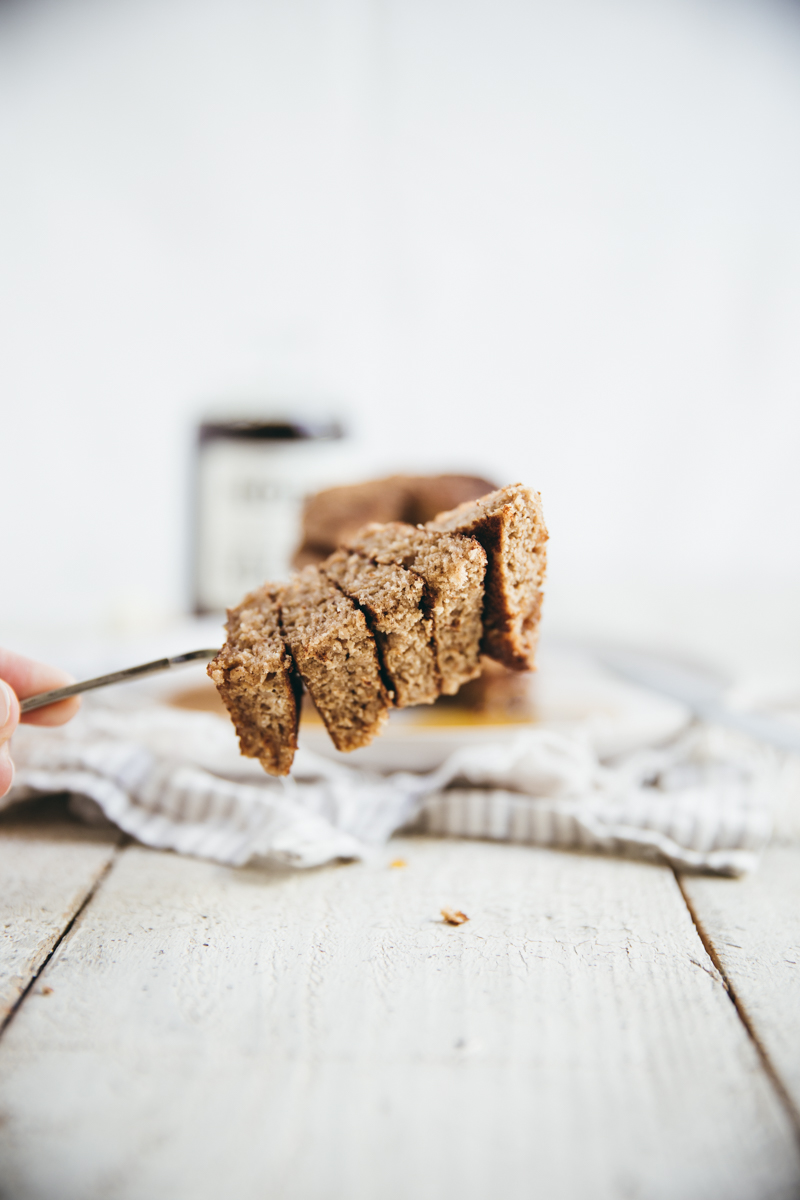